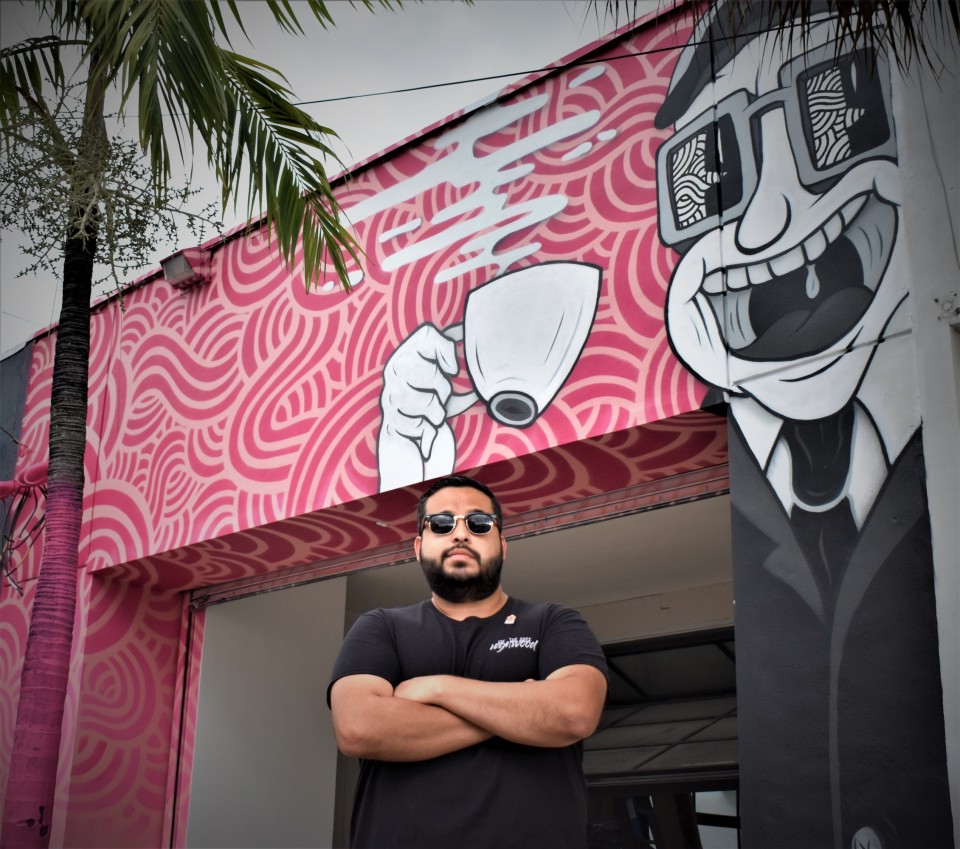 JOE & THE JUICE is a coffee concept with a cult following of urban trendsetters and creative thinkers. That’s why in January of this year,  the brand’s team set out on a search for Miami’s Next Great Artist. The winning artist would have the opportunity to paint an original mural on the JOE & THE JUICE Wynwood storefront and receive a $5,000 cash prize. As part of the competition, entries were submitted on Instagram via the hashtag #artforjuice.

In February, JOE & THE JUICE announced the winner, Miami local artist Jorge-Miguel Rodriguez. Rodriguez won the opportunity to paint the mural design at the Wynwood location and cash in on the grand prize. Rodriguez is no newcomer to the art mural scene. He has completed countless pieces in Miami, Florida.

We caught up with Rodriguez in Wynwood, to ask him about his new collaboration with JOE & THE JUICE.

What made you enter the #artforjuice contest?

I entered the contest because I wanted to collaborate with JOE & THE JUICE. I wanted to create something really cool and exciting for Wynwood. And the new store that’s coming.

Why did you feel that it was important to get in on the action?

I wanted to create something different and unique. I felt that I had a couple ideas, that I thought would go perfectly with their brand and what they want to do. I took their logo and added my style to it. A little bit of My Rodri Flair. And then I created the JOE character, that’s on the wall right now. It was off one sketch and that was it. Once I created that JOE character, it was hook, line, and sinker. I created two. The second one is on the shirt. The other one is on the wall.

Did you want to incorporate some Miami inspiration into the mural?

In a couple of the original designs, yes, there was a lot of the Miami colors. I’m inspired by all the colors that are in Miami. All the bright and vibrant. Whether it’s the neon or Miami Vice kind of style. From there, I took their pink and then I created a gradient to the classic Miami Vice pink, bright magenta. And then I added my line work detailed into it.

What do you want people to take away from the mural you created?

What is your favorite part of the process?

All of it, just seeing the end result from the sketch to the final piece. Seeing it all come together.  Through the approval process, the back and forth of the concepts and then stepping back and seeing it in full. There it is. 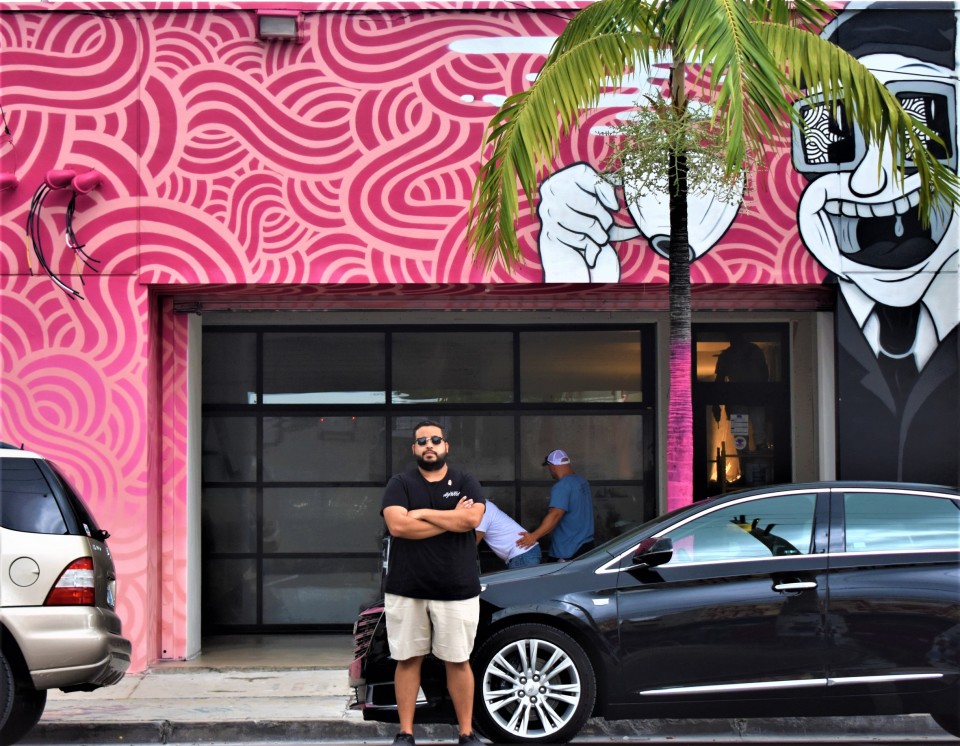 How long did it take you to complete this mural?

So the mural. I’m a fast painter. I don’t know why. As soon as I touch cans to a wall, I just go in. It took me around two days. Two and a half days. So I started Friday night, just laid out the sketch and then Saturday I put in about twelve hours. Then Sunday, cleaned up the last touches whatever little line works it was missing. Only really stopped to eat obviously, of course, because we kind of need food and because it rained. But that’s really much it, it rained in the morning and then I knocked it all out.

Did you have any other challenges, aside from the rain?

No. It’s typical. It’s not really a challenge. It’s usual. Like it’s raining right now. You just roll with the punches. You know? Put all your stuff away, put it inside and let it pass.

How long have you been painting?

I’ve been painting for about forever ago. Ever since I can remember I was doodling something. Either a wall or crayon books. Yes. Painting. I’ve always been painting. Especially, since about 2010. That’s when I got fully developed into the process and creating it into a profession. But it has always been a passion. It never stops.

Anything and everything. Anyone that approaches me and says “Hey Rodri, I have a cool project.” Or “I think this will look cool here.” I’m always down for it. I never stray away from a project. Unless there are certain things that I feel are maybe a no.

Anything you want to say to Joe & the Juice?

Yes, for sure. I really want to thank JOE & THE JUICE for the amazing opportunity and for allowing me to collaborate with them. For allowing me to work with their brand and create something special and unique for this store.

The Wynwood JOE & THE JUICE located at 3215 NW 2nd Avenue is the fourth store in Miami and marks the 242nd store opening worldwide.