It’s back, now in its fifth year, the South Beach Seafood Festival is scheduled for October 17 – 21, 2017. This year the festival will bring dinners and events leading up to the main event on the sandy South Beach. You will experience the talented chefs and local culinary artists through a showcase of fresh seafood dishes. 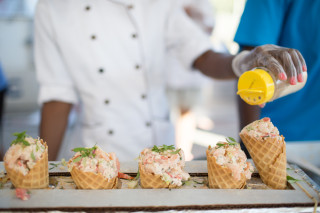 The events will be giving back to CI Foundation’s EAT SMART program. A portion of tickets sales will go toward the program that is geared to end hunger and obesity among children in Miami-Dade County and Communities in Schools of Miami (CIS of Miami).

On October 21st, the beachfront event will be sponsored by Kendall Jackson and presented by Coca-Cola and Jack Daniel’s. The festival will span five blocks and be held from noon to 7 p.m. with extended partying for VIPs until 9 p.m. You will experience culinary dishes from:

FOR 20% OFF VIP TICKETS USE CODE: MIAMICROWD

VIP tickets are $150 and include $20 worth of food vouchers, access to the VIP Hospitality Village where private samplings will take place. The VIP experience allows you access to keep the party going until 9 p.m.

Events leading up to the South Beach Seafood Festival include:

Your ultimate VIP night where 16 chefs go head-to-head in 8 different seafood battles and as a guest, you’re the judge!

Reigning champions defending their titles are:

Tickets can be purchased for all events at www.sobeseafoodfest.com.

Previous PostOfficial Miami Hurricanes All-Inclusive Tailgate Party (vs. Syracuse)
Next Post5 Things You Should Know About the 2017 Lancer LE