Stephanie Hernandez is part of a new supernatural horror film based on a group of science students who have discovered how to explain the paranormal and prove the existence scientifically. We asked Stephanie questions surrounding her latest role in Investigation 13. Here’s what she had to say.

What made you pursue acting?

One day, my modeling agency urged me to go to a casting for a TV pilot. I arrived at the casting without knowing anything about the acting industry or the process and man did I fail in that experience. I remember being so nervous that my voice was unsteady, hands were shaking, and I don’t believe that I looked up once from my script throughout the audition. I walked away from that experience knowing that I wanted to take on the challenge and hone the craft of acting. I’ve been in love with the art ever since.

What can you tell us about your latest involvement with this movie?

Just when we thought that we would never enter the asylum again, we were called in for reshoots about a year or two after our original shoot. I put my goth pants back on, suited up, and back in we all went to finish the film we dedicated our sweat, fake blood, and real tears into. It was really good to be back with the cast and crew.

You play the character Melanie Gates…do you see yourself in her at all?

Melanie Gates, what a character to embody. Bringing her to life was about curiously tapping into her characteristics that already existed deep within my own self. We all have the potential to be whomever we wish to be, it’s just about bringing it to the surface.

I remember the moment that I viewed the casting notice sent from my agency which read, “Melanie Gates: Caucasian; Gothic; Short dyed hair (preferably purple); Fair-skinned.” I laughed to myself and thought, “I’m Hispanic, long-haired brunette, tan skin, far from gothic. There’s no way I’ll get this role.” The casting alone was over an hour and a half away from where I lived at the time and I didn’t want to waste my own time either. Somehow, I woke up the very next day and thought, “Well, let’s go out there and change their minds on this character.” I dressed the part to help my case as much as possible opting for fishnet black tights, shorts, black combat boots, a black top, threw a hoop nose ring on, threw my hair into high two buns, heavy eyeliner, dark nail polish, prepared lines, and I was out the door. During the drive down, I knew that I had to own it and that’s exactly what I did. I remained authentic in my performance and allowed my inner goth chick to reign. I was later called in for a callback audition and a week later during a camping trip, I received an email that I booked the role. 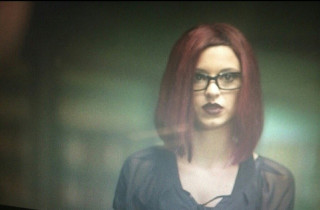 What advice would you give your younger self to prepare you for the acting world?

Hands down, I would tell myself to look at acting as a business and a brand. Yes, one could whole-heartedly love the craft, but it will remain a hobby if it isn’t treated as a profitable business.

What do you love about this character?

I was initially intrigued by the challenge of such a contrasting personality, style, and lifestyle altogether. I was curious and excited to dive into a character so vastly different than the person that I was at the time.

We’ve only seen a few clips but since this was filmed in South Florida what was your favorite location?

My favorite location was where we shot the ADR footage after we wrapped on location. It was the home of a team member, Chris, and it was completely spirit-free. (laughing) Otherwise, we were filming in a real, abandoned insane asylum. It was the least favorite place that I have ever endured to this day. It was brutally hot, filled with intensely low energies, and a lot of strange occurrences happened during and after filming. We were all relieved the moment we knew we never had to enter that place again.

Anything you want the viewers to take away from this movie?

That spirits are real.

Investigation 13 is available September 10th on iTunes and Amazon.

All Aboard THE POLAR EXPRESS!

Tanqueray Sevilla Orange Launches in Miami with a Colorful Mural